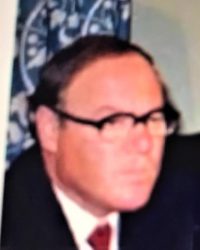 Clare GAA would like to express their sympathies at the passing of former county board Chairperson John A (Jack) Daly.​ The Ennis native came from a prominent business family long established in the county town.​ Mr. Daly is a former Fianna Fáil Councillor, and served for a time as the Chair of both Shannon Development and the University of Limerick.
Jack enjoyed a fruitful playing career in his youth. He captured Minor B hurling honours in 1954 and Minor A honours in 1956 with St Johns GAA club in Ennis. He moved on to Eire-og GAA club and lined out at full forward in their senior county final win of 1957 as they defeated Whitegate.
He became the youngest ever county board chairperson in his mid 20s as he succeeded John Jones N.T in the chair on January 27th 1963. He served two terms as County board chairperson in a time of great innovation for the GAA of which he was front and centre of same. John Hanly succeeded Daly in the role in 1965 as the Ennis man became Clare’s central council delegate from 1965 until 1970. Long term GAA official Brendan Vaughan replaced Daly in this role.​ Jack Daly progressed to enjoy a high profile business and public representative career over a long period of time.
One of his most notable contributions to Clare GAA was ironically the donation in 1969 of one the most famous trophies in the GAA for the Clare Senior football championship known simply as “The Jack Daly Cup”. This cup has been the most sought after symbol of success in Clare football for half a century.
Clare GAA Chairperson Joe Cooney has expressed his sympathies to the family and friends of Jack Daly. “In a time of great change of a new emerging Ireland of the 1960’s Jack Daly was a leader in business. politics and sport and brought his vision with great success to his role firstly as County board chairperson and then as long time central council delegate”. Cooney continued “He will be forever remembered in Clare GAA for his donation of the famous Jack Daly cup which is highly prized by all Clare football sides”.​The county Chair concluded by saying “We in Clare GAA would like all Clare GAA Gaels to remember the passing of one of our​ foremost administrators as we think of who will miss him most, his family, Wife Margaret Forde, Sons Stuart & Alexis, daughters Sarah Ellen & Rhoda, extended family​ , relations, colleagues and friends. Ar Dheis De ar a anam”.
By Clare GAA President Padraic MacMathuna and Clare GAA PRO Michael O Connor.