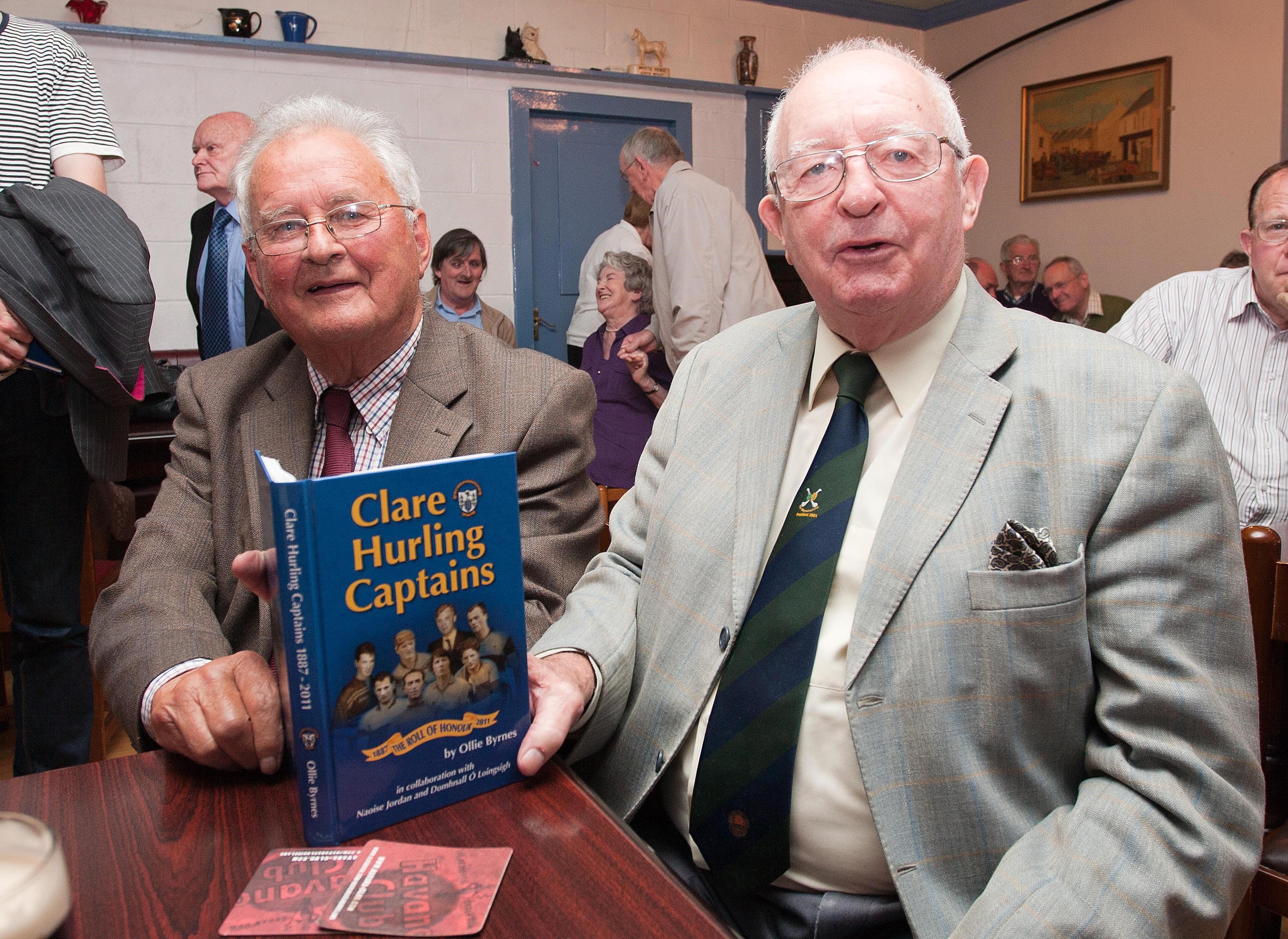 All the Clare Gaa fraternity was saddened this week with the announcement of the death of Dan McInerney.  Dan from Scariff, played full back for the Banner and came up against and mastered the best – Ring, Mackey and Rackard.

Dan’s hurling lineage is easily traced. His father Tom was an O’Callaghan Mills man and featured in the county final of 1916 against Scariff, a game in which seven Mclnerney’s, cousins included figured uniquely. Eventually the Scariff connection was firmly cemented when the Mills maestro married Scariff lady Delia Lenihan. “My earliest memories would have been of my mother sprinkling holy water on us as we were heading out to the matches and telling us to “mind our bones, be sure to win”, recalled the youngest of eight, whose brother Frank also played with distinction for Clare Seniors. Dan McInerney enjoyed the rare ‘oul times on three fronts during his career. At club level, he was one of the stars of the Scariff side, which scooped the county Championship title for the first time in twenty nine years when going the distance in 1946. He was centre half back then and again when the club triumphed in 1952 and ’53. The Scariff teams were more than useful though and discerning Dan hastens to point out that it was far from a one-man band. Alongside him at Scariff were seasoned county men like Alfie O’Brien, J.J. Bugler and Des Carrol with other fine players. “Sometimes it was hard enough to mobilise the troops early in the year at Scariff but if we won a few matches early on, we were OK”, remembered Dan whose good fortune it is to be married to Gemma and to be the father of Daniel, a Quantity Surveyor, Mark, a Bachelor of Science in Building and Civil Engineering and Mary, an Artist, married in England with 2 children and Gemma Junior, a Graduate in Marketing and Business Studies and working in the U.S. Dan was a Civil Engineer by profession earning his academic spurs at U.C.D. where he teamed up with such luminaries as Limerick’s Dick Stokes, Dermot Solan and Bob Frost of Clare, Waterford’s Ned Daly and Mickey Feeney to capture a Fitzgibbon Cup medal in 1943. however, it was as a class full back for Clare Seniors that Dan McInerney became especially well-known and respected as a hurler of few equals. In his first season with Clare Seniors he negated the talents of the one and only Mick Mackey of Limerick to help steer the Banner county to a National League title in 1946, holding him scoreless in fact in the process. Dan in truth, played and acquitted himself superbly against arguably three of the best hurlers ever to stand on this earth. Nicky Rackard of Wexford and Cork’s Christy Ring in a contest when forced to face up to glue-like attentions of the Scariff star. Oireachtas honours when 50.000 attended the finals came his way in 1954 as Wexford fell to the Claremen, Reflecting back on his team’s agonising 1955 Munster final defeat to Limerick, the three times county Senior Championship medallist doesn’t put a tooth in just why the Banner county didn’t manage to follow up on their earlier provincial round victories over Cork and Tipperary. “I have been asked a thousand times as to the reasons why we didn’t win the title in ’55. Changes should have been made early in the game that could have made all the difference. Perhaps we were also a bit over-confident, explained the red-blooded full back whose semi final display against Tipperary earned him a National newspaper’s Sportstar of the Week Award. No regrets, no tears to cry. Dan McInerney delighted in his star spangled career. Limited resources in personnel was the Clare bugbear in the days when Cork City alone bred more players than East Clare clubs put together. A man who when the hurley was retired to the mantlepiece went on to head up the famous McInerney homes who built large tracts of Dublin and famously built the Hogan Stand. A lot done in many spheres of life, sport, family and community. His legacy will live on wherever his name is mentioned. Deepest respect and sympathy from all in Clare GAA to his family, friends and to Scariff GAA. Ar Dheis de ar anam dilis.