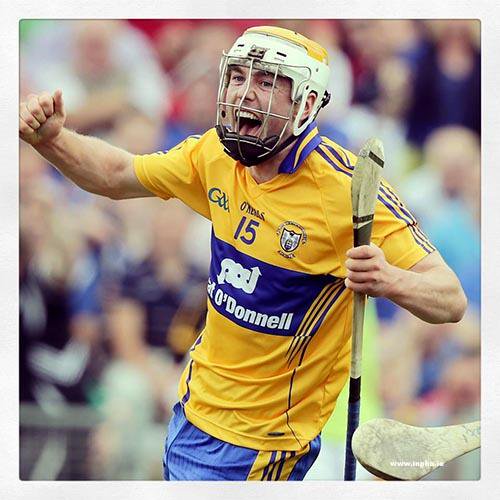 Not one of the spectators in the Cusack Park would have predicted a fifteen point win for Cratloe during half-time conversations, the result may not have been a major shock but the nature of it most definitely was.

Cratloe outscored their opponents 3-17 2-02 in the second half, Rian Considine and Cathal McInerney raising the green flags. Considine who was the standout player of last year’s club campaign as they reached the county final, has been a member of the county senior panel this year but delivered his best half hour of the year in a timely manner.

Crusheen’s second half was most uncharacteristic. They didn’t showcase the fight and determination that has been part and parcel of their displays for the past decade and a half. Although they responded immediately to Considine’s first goal, his second was the sucker punch and a blow they would not recover from.

In the opening stages, it was Alan Neville’s Cratloe that started the better with four points on the trot. Crusheen when they did settle took control adding nine of the next ten scores. Both sides demonstrated good link-up play with a Cathal McInerney cross-field pass finding Diarmuid Ryan for his first score and Cilléin Mullins teeing up Paddy Vaughan to reply at the other end. The exchange would be the final scores of the half as the men in red led 0-10 0-07 at half-time.

What transpired in the second half was a Cratloe bolt from the blue. With sixteen seconds played, Rian Considine struck past Donal Tuohy, a Conor McGrath delivery was superbly controlled by the Harty Cup winner who jinked right and left before slotting home. Straight away, Éanna McMahon replied up the field but the 2014 double champions bit back with 1-07 in the space of nine minutes.

Ross Hayes popped over a free which was the second score of the half for James Carrig’s men on forty five minutes. Cratloe again came back with seven points in as many minutes. Substitute Mark Perill and Hayes added consolation goals for Crusheen but McInerney got away from Cathal Dillon to tap home their third goal to put the icing on the cake.

Having scored nine points from play in this year’s campaign for the Blood and Bandages, the fact that Jamie Fitzgibbon was kept scoreless warrants credit for the Cratloe management in deploying Enda Boyce until injury ended his involvement and then Sean Chaplin on one of Crusheen’s key men. Both Fergus Kennedy and Conor O’Donnell had also been prominent throughout the championship but didn’t register on the scoresheet due to close monitoring from Diarmuid Ryan and Michael Hawes while the loss of Alan Brigdale was certainly felt in their defence.

Getting to the last four was an achievement for Crusheen, they performed very well for the majority of the year but will be extremely disappointed to have finished on such a low note. Paddy Vaughan had their most amount of scores from play so the decision to substitute him was a surprise, even though the game was over at that juncture. Most definitely, James Carrig has rejuvenated the side during his tenure, over the coming months and two years they will lose further players to retirement, finding the men to fill the gaps will be a big challenge.

Rewards for Cratloe don’t come much better than a shot to beat Sixmiilebridge in a county final. Their rivalry is intense and meeting in the biggest day of the Clare club scene is expected to bring its share of fireworks. Though they played second fiddle for large spells of the first half, they still kept their composure and packed a punch in the second that Crusheen could never regain their footing from.

As mentioned above, they got their match-ups right and for this praise is just for Alan Neville, Mike Deegan and Padraig Collins. They are well aware that claps on the back following a semi-final can soon be forgotten so they must now put a plan in place to upset their neighbours. Conor McGrath at midfield was outstanding, Rian Considine, Damien Browne and Cathal McInerney were to the fore for the winners.

It wasn’t until the fifty second minute that Sixmilebridge took the lead for the first time but once they got their noses in front, they were never going to relent.

With a county final appearance to come in two weeks time, it means The Bridge will have contested every senior decider this decade in a year ending in an odd number. Inagh/Kilnamona who have yet to appear in a championship final will be ruing their return of fifteen points.

Although their eight wides was less than Sixmilebridge’s nine, it was Inagh/Kilnamona’s first half showing in which they were in control but only led by one point at the interval that played a significant part in their undoing.

During the opening half, the Combo did have a Niall Arthur goal disallowed. His green flag on the twenty fourth minute was deemed to be a square ball by referee Jarlath Donnellan, it would have put them four points in front and been an invaluable platform at half-time.

Inagh/Kilnamona supporters were disgruntled with the decision and the fact they received just one free in the second half in comparison to Sixmilebridge’s ten but can thank Donnellan for not giving Arthur a red card following on from the ‘square ball’.

Three points in succession from the beaten Clare Cup finalists via Aidan McCarthy and an Evan McNamara double seemed to suggest it may in fact be their day, an excellent long range effort from David Fitzgerald at the beginning of the half would have strengthened such a hypothesis.

However McNamara’s second score would be the one to get Sixmilebridge going. Straight from Derek Fahy’s puckout, Jamie Shanahan raised a white flag with scores from Alex Morey, Shane Golden and Caimin Morey following. The final quarter saw The Combo outscored nine points to two.

Sixty minutes separate the Tim Crowe managed and Davy Fitzgerald coached Sixmilebridge from a fourteenth Clare SHC title. This game, like the quarter-final saw them play nowhere near their potential but crucially they got over the line. In what was a strong team performance, Jamie Shanahan and Caimin Morey were most influential for the winners.

Not alone were Inagh/Kilnamona guilty of not showing their first-half dominance on the scoreboard but they failed to make the most of the supply of ball into their forward line. They definitely could have tested Sixmilebridge’s defence more and bar a Derek Fahy save from David Mescall on fourteen minutes, they didn’t have a meaningful goal chance. It will take time for Fergal Hegarty’s charges to get over this defeat but on inspection they will realise one of the big differences between the winners and losers in this tie was the grit and self-belief. Keith White, Kevin Hehir, David Fitzgerald were to the fore for Inamona with Aidan McCarthy causing problems until Seadna Morey was assigned to the county panellist.