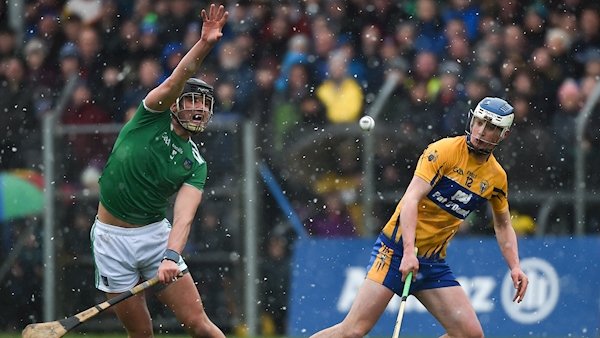 Aaron Gillane pointed a free in the fifth minute of injury-time to snatch a draw for All-Ireland champions Limerick against the only team to beat them in last year’s championship.

Conditions were appalling from the outset with sleet and snow but, in the circumstances, the surface at Cusack Park was good.

Yet it was extremely difficult for the players to perform in the Arctic conditions but Clare, backed by the breeze, started well with points from Tony Kelly and Shane Golden.

Neither team held back and Gearoid Hegarty of Limerick and Clare’s Patrick O’Connor were booked in the early stages, while yellow cards were also dished out to David McInerney and Seamus Flanagan in another flare-up.

The All-Ireland champions came storming into the game when Hegarty pounced on some hesitant defending to race through and blast to the net after ten minutes.

Clare hit back with a point from Peter Duggan but two Gillane frees left Limerick ahead by 1-2 to 0-3 at the end of the opening quarter.

Diarmuid Ryan and Kyle Hayes swapped points and while Duggan landed two more frees he missed three in the opening half.

Limerick finished the half well with Colin Ryan, wing-back Paddy O’Loughlin and Peter Casey shooting points to lead by 1-7 to 0-6 at the interval.

Clare made a blistering start to the second half with Shane Golden bursting through for a goal before Gary Cooney tied the sides just two minutes after the restart.

But Limerick responded well with two frees from Gillane and then two from play from Peter Casey, while their lead would have been greater had Clare goalkeeper Donal Tuohy not produced a stunning save to block a penalty from Gillane after 43 minutes.

Duggan reduced the deficit to a goal going into the final quarter with his fourth free and then Diarmuid Ryan landed one from play which was initially signalled wide.

That left Limerick leading by 1-11 to 1-9 ahead with 13 minutes remaining in the contest.

Duggan cut the gap to the minimum with a free from distance with ten minutes left and then fired low to the net three minutes later after a good run by Golden.

That put Clare ahead by 2-10 to 1-11 and after Gillane cut the gap with a free, Duggan responded with one for the Banner County.

Gillane again cut the gap to one with another free heading into five minutes of injury-time and he delivered the equaliser in the dying moments when Casey was fouled.