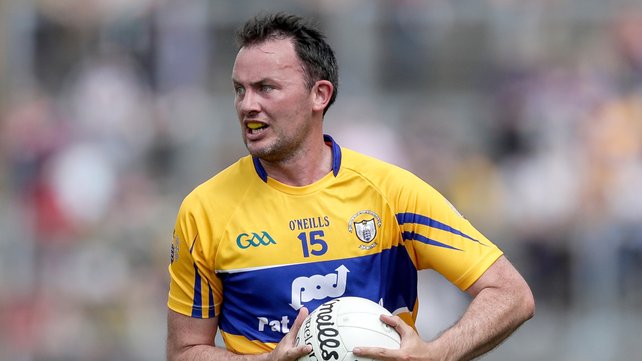 1-7 from David Tubridy helped Clare to a second successive National League victory over Cork in this Division Two encounter as Clare ran out winners by 3-13 to 1-10.

The Doonbeg veteran took less than a minute to get on the scoresheet, with Jamie Malone playing a teasing ball across the Cork goalmouth which Tubridy palmed to the net.

Cork responded with a point from Matthew Taylor, but great work from Clare captain Gary Brennan saw Conal O hAinifein thunder into space and finish a brilliant shot low to the Cork net to put the Banner into the driving seat.

Cork hit back with the next two scores to leave just three between the sides, but this was as close as they would get. Tubridy notched a brace which was answered by Stephen Cronin, but another Banner double through Dale Masterson and Dean Ryan left Clare 2-4 to 0-4 clear with ten minutes to go to the break.

Luke Connolly and Stephen Sherlock pointed frees for Cork, but Tubridy and Conor Finucane hit back for the home side to leave them 2-6 to 0-6 ahead at half-time.

Scores proved harder to come by in the second half, with Sean Collins and Jamie Malone pointing either side of a sole effort from Cork’s Liam O’Donovan.

Michael Hurley brought it back to a six-point deficit soon after, but Tubridy was to the fore once more with a brace of long range scores to keep Clare in the ascendency.

Cork did breach Clare’s rearguard with five minutes of normal time remaining, when Ian Maguire got a fist to a high hanging ball to leave it Clare 2-10 Cork 1-8 as the clock ticked toward full-time.

Clare responded well once more with another point from Tubridy, with Matthew Taylor hitting one back for the Rebels.

Conor Finucane and Tubridy were on target once more with a close range free from Luke Connolly coming in response.

The final score of the game saw St Josephs Miltown team-mates Cormac Murray and Kieran Malone combine, with Malone rolling the ball to the back of the Cork net to seal a huge win for Clare in what is proving to be an unpredictable Division Two campaign.